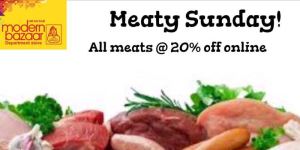 Modern Bazaar, Indias first supermarket, completes 45 years of service this year. Our story dates back to 1971 when Late Vishwant Kumar set up a departmental store selling imported food products in C-block market in Vasant Vihar, New Delhi. This was the first of its kind in India and it didnt take time for the word spread that quality food from all over the globe was being sold under one roof. In 1976, Modern Bazaar shifted to Vasant Lok market and grew from being a single floor shop to a four-storey emporium. One of the iconic stores in Delhi, Modern Bazaar has been the shopping destination of celebrated Indians such as veteran Bollywood actor Amitabh Bachchan, politician Sonia Gandhi and others. The store was so famous, that the entire Vasant Lok market came to be known as Modern Bazaar.

The current director of the company, Kunaal Kumar joined the family business in 1991 and after the store suffered a fire in 2004, he built a new one in the same place the following year. Since then, there was no looking back! The chain now, has Seven outlets in Vasant Vihar and has expanded to other places in Delhi like Select City Walk Mall, Gurgaon DLF Phase I, New Friends Colony, Punjabi Bagh, East of Kailash and Cyberhub (Gurgaon), with one store in each location. Within this year, it plans to open stores at Dwarka and Noida as well.

Your experience on this site will be improved by allowing cookies.