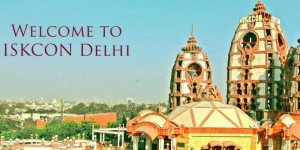 After one crosses the Yamuna River from Delhi, India’s overcrowded capital city, the sight of Noida, a large satellite city in the National Capital Region, creates a welcoming impression. Since 1970, eight hundred thousand people have moved to Noida (short for New Okhla Industrial Development Authority) to take advantage of its wide roads, expansive residential townships, successful economy, excellent infrastructure, and emergence as a major hub for outsourcing and education. Naturally devotees in the International Society for Krishna Consciousness saw an opportunity to build and sustain a congregation here, and their vision proved to be true. Devotees opened a small center here in 1998. Over time, the congregation of families, working youth, and college students grew, as did the need for a suitable temple. Following almost eight years of planning and development, the temple opened on February 12, 2014, with the installation of deities of Radha – Govinda,Gaura-Nitai (Caitanya and Nityananda), and Jagannatha, Baladeva, and Subhadra.
Situated on a main boulevard and adjacent to Krishna Jayanti park (owned by the government, maintained by ISKCON), the temple is highly accessible and visible. As modern and progressive as the city it overlooks, still it represents the Caintanya Vaisnava tradition. On either side of the front of the temple are giant reliefs of Sri Caitanya and Nityanada, and the temple opened on the anniversary of Lord Nityananda’s appearance.

ISKCON Establishes Itself
The plot ISKCON secured is small, so the strategy was to “go vertical” to accommodate all of a temple’s typical elements. Topping the seven stories is a sixty-foot spire, its tip 130 feet from the ground.
In the mid 1970s Srila Prabhupada supervised the design of the first full-fledged ISKCON temple in a major Indian city, in Mumbai  (Juhu). The Noida temple follows a similar model , with a large temple room, an auditorium, an adjoining guesthouse, a restaurant, a hall for wedding and birthday celebrations a floor for education, and a kitchen and bedrooms in a residential wing. The temple shops, offices and hall are ready for use.
The Stone façade, with balconies, is similar to Srila Rupa Gosvami’s sixteenth –century Radha-Govinda temple in Vrindavan. The façade and the interior also feature hand-carved stone peacocks, elephants, a hundred intricate pillars, jails (lat-ticework), jharokhas (balconies), and chhatris(domed pavilions).
A Boon for Outreach
The new temple will increase and improve ISKCON Noida’s out-reach, festival planning, and congregational development. The building will include the Bhaktivedanta Academy, ensuring that education will be easily available to the congregation. The Academy will have five classrooms, administration space, two large seminar halls, a play school for young children, and a library where vistors can sit at computers to read e-books or download lectures and kirtanas.
Srila Prabhupada wanted ISKCON temples to be places of education, and the Noida temple already offers courses in partnership with the Vrindavan Institute for Higher Education, organized by devotees at ISKCON’s Krsna-Balarama temple in Vrindavan. A commercial center being built a few blocks away will give devotees quick access to many people, improving the opportunity to attract the spiritually inclined to true higher education.

Your experience on this site will be improved by allowing cookies.